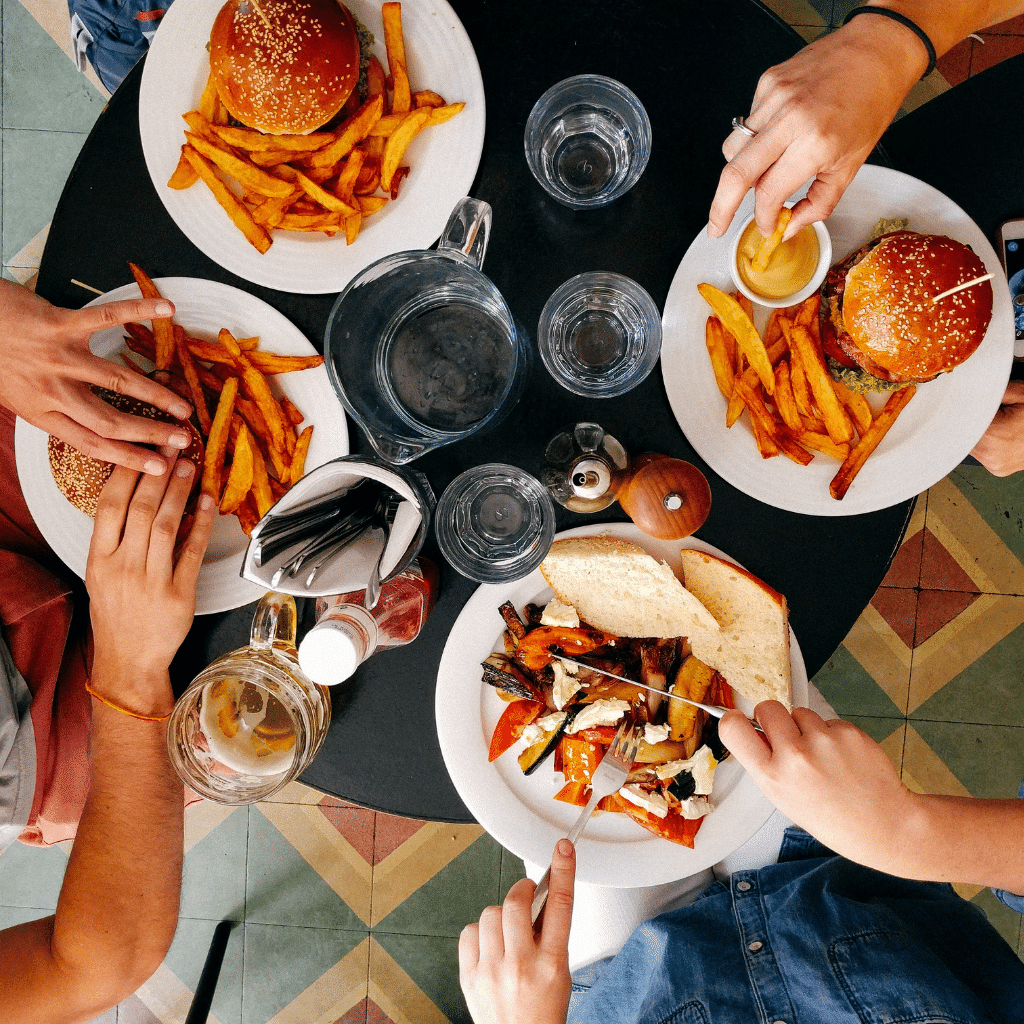 The first thing you need to know before arriving in France is order food in a restaurant in French. This is important if you want to eat and also to taste the French food which is one of the best in the world.

The registers of language in French :

A little reminder about language registers:

The language registers make it possible to categorize vocabulary, expressions and turns of phrase according to the situation in which you are or with whom you are communicating.

Mostly, we use common language, it's a neutral register that can be used with everyone without any problem.

If I am with friends, family, people I know very well, I can use with them a informal language.

If I am in more formal situations, such as a meeting with my banker, or in a business interview, I will use a more formal language register.

And more rarely, if I'm in a situation with people of a very very very high social class, in an ultra sophisticated setting it's better to use sustained language. Or if I'm writing a book, I can use a elevated language.

We will now see how to address the waiter to order our meal in these different registers of language.

In the corner bistro (informal language):

We will see how order food from the local bistro in French.

When we use in French "le coin", it means a place not far from our home, in our village or neighborhood. It is a friendly place where everyone knows each other and where the exchanges are rather familiar.

Let's see an example of how to order food in the local bistro: 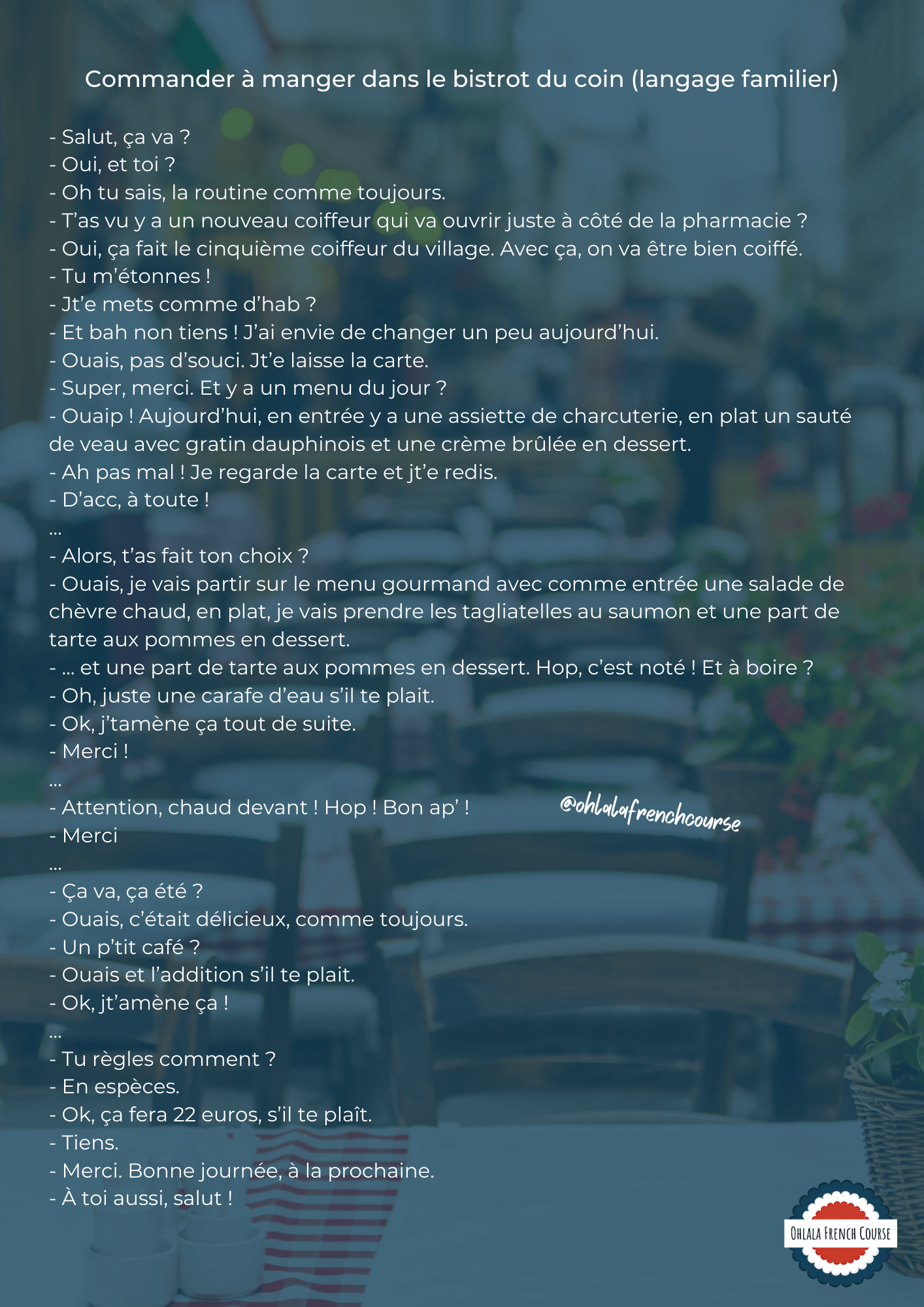 In most restaurants (common language) :

Let's see now how order food in most restaurants in French. We will use a common language register here. 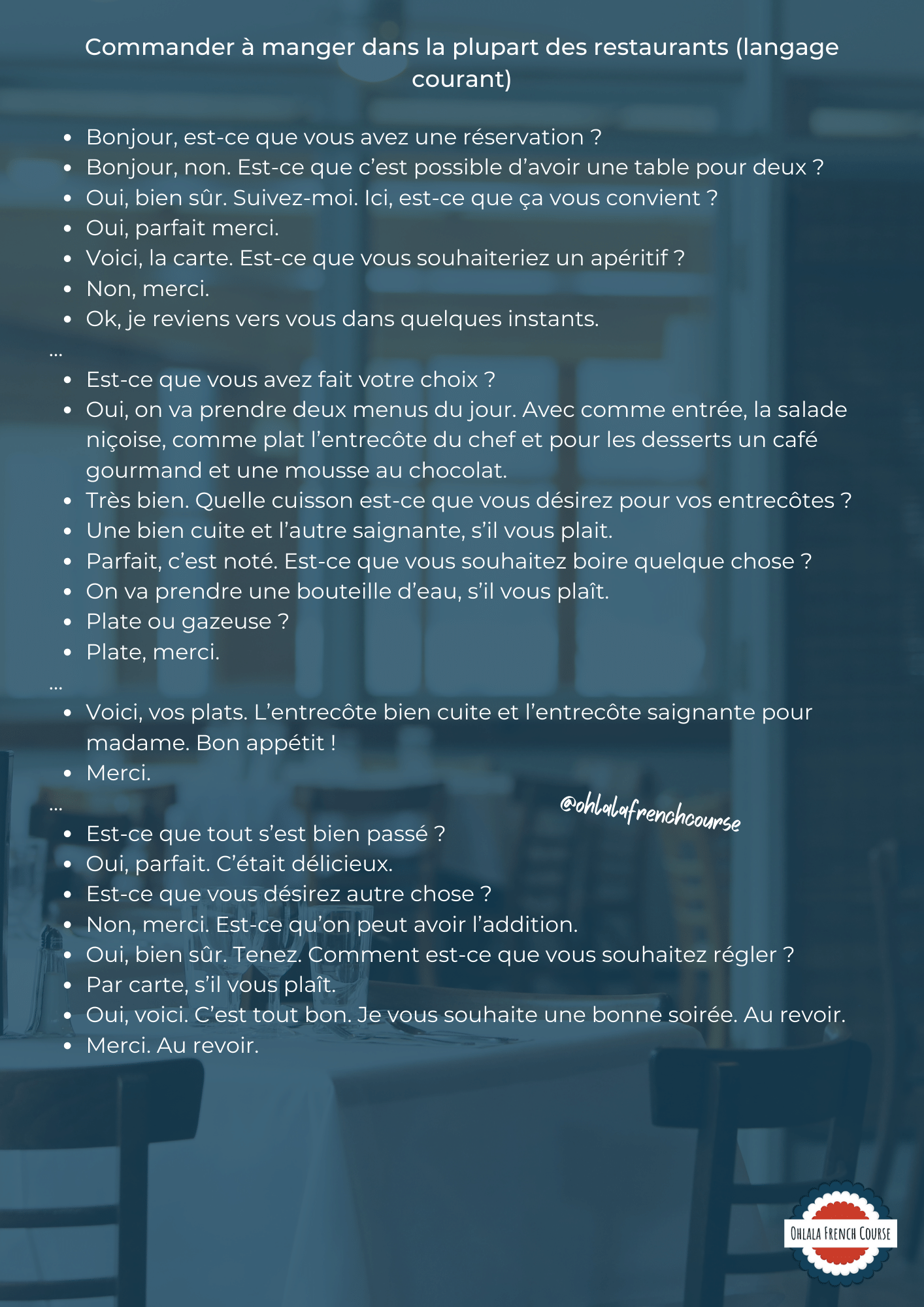 We will now see how to order and address the waiter in a gastronomic restaurant in French. The language register here will be much more formal. 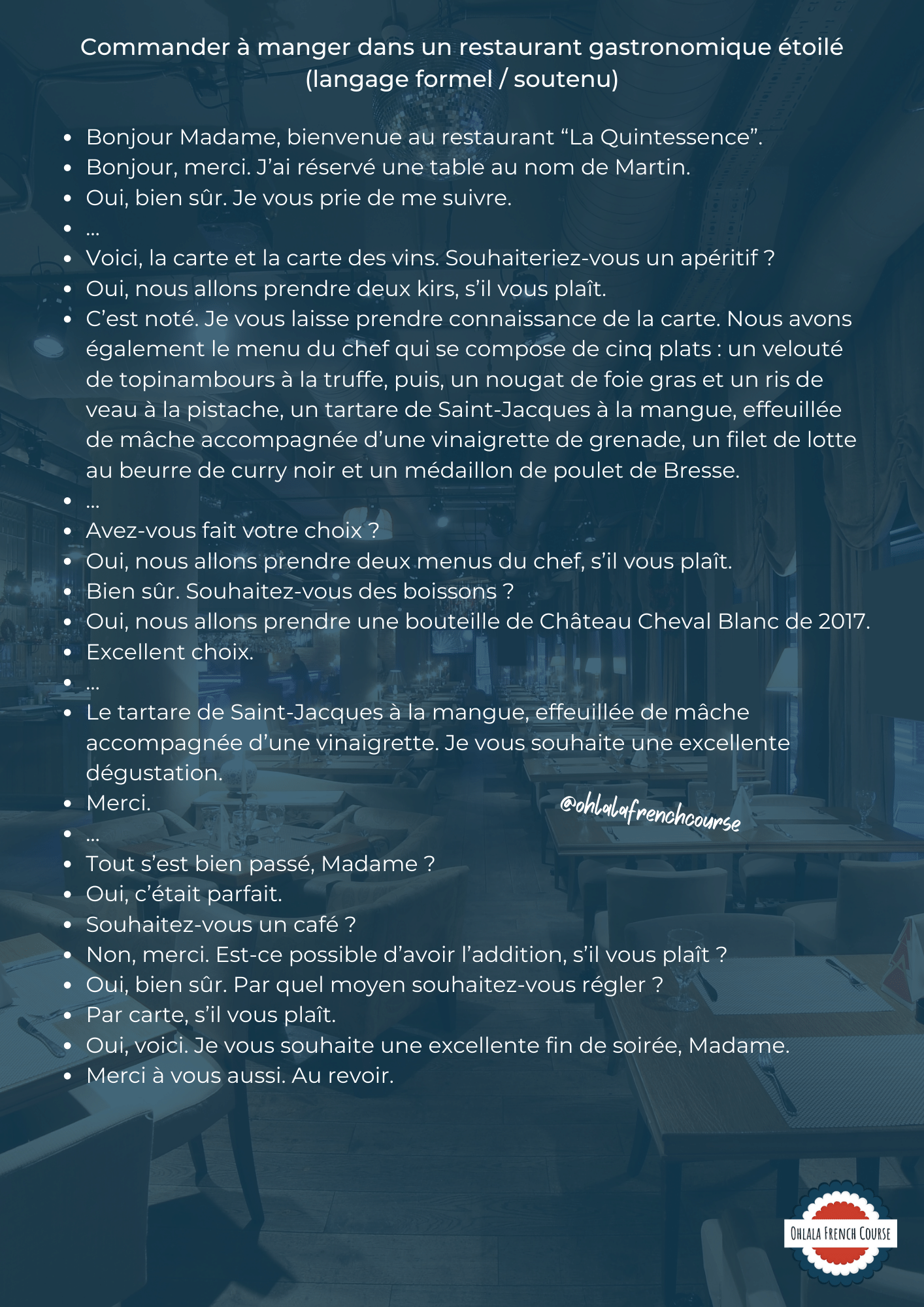 You have certainly noticed some differences in these dialogues.

Let's take a closer look and see the main differences between the three French language registers.

In informal language, we are more likely to say “Salut”. It's only for people we know, we do not use “Salut” with strangers.

In common and formal language, we say “Bonjour”. We can use “Bonjour” with everyone without any problem.

Here in the gastronomic restaurant we add “Bienvenue”, because it is a more sophisticated place where the reception must be perfect.

The "tutoiement" / the "vouvoiement" :

We will be on first-name terms with someone we know well: a friend, a good acquaintance, his family.

In the first dialogue, we know the person who manages the bistro, so we can say "tu". It is a less formal and friendly place, so saying "you" is natural.

In the two other dialogues, we are in a situation where we don't know the waiter. We are in a more formal situation, so we will use "vous".

When speaking, there is a strong tendency not to pronounce all the syllables in words, but even more so if you are in an informal situation.

In particular, in French, there is a tendency to remove the "e" from certain words in speech.

Still when we speak, but in a more common and formal situation, we will remove the "e" a little less than in an informal situation. But, it can happen that we do it on some words like "Est-ce que".

If you want to know more about the differences in pronunciation between the more formal and colloquial language registers, I recommend this article: French textbooks VS authentic French

There are many expressions that are part of the colloquial and oral language, that we use in speech.

“Tiens” is an expression that indicates astonishment or surprise. It is also a phatic expression, that is to say, it serves no purpose, but it allows us to attract the attention of the interlocutor in our conversation.

“Pas de souci” is a informal expression that means "There is no problem".

“Ouaip” is a distortion of "Ouais" which is a more familiar way of saying "Oui".

“Pas mal” is an expression that means "it's good".

“Hop” is a filler word that often accompanies a movement or an action, as here in our dialogue: “Hop, c’est noté !”. The "Hop" accompanies the action of having written.

The French like to add the adjective "petit" everywhere, even though it doesn't necessarily mean small in size. Sometimes, adding "petit" has a nicer effect in the sentence. It's more familiar and friendly.

"À la prochaine" is a more informal expression for "See you soon." It means we'll see each other soon, sometime in the future.

In everyday language, we have more neutral expressions that you probably already know, like :

In the more formal/sustained language, we find the same expressions as in the common language, but also others:

Instead of  “Bonne journée”

The vocabulary will also be somewhat different.

In the colloquial language section, there will obviously be a more colloquial vocabulary, such as clipped words:

In the formal register, the vocabulary will be much more specific and distinguished especially when describing and talking about food.

Lastly, the syntax will be different depending on the language registers, especially when asking questions.

In colloquial language, we will ask questions with intonation. That is, the syntax will be similar to an affirmative sentence, but the intonation of the voice will let us know that we are asking a question.

In everyday language, we will ask questions with "est-ce que".

And in sustained language, we will ask questions with inversion. We will invert the place of the subject and the verb.

Learn more about : How to ask a question in French? 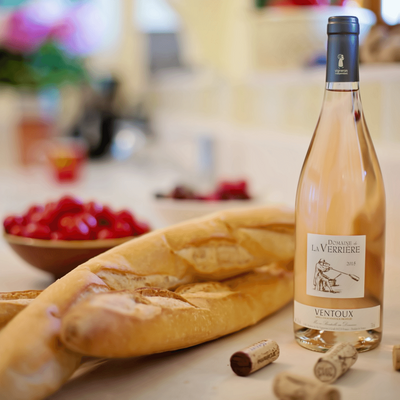 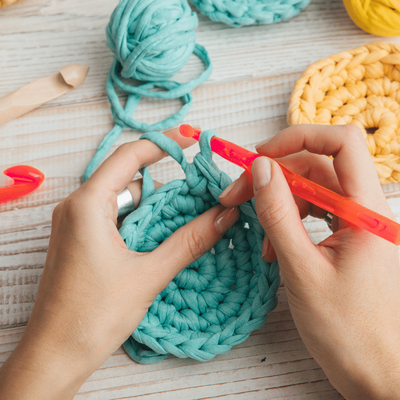 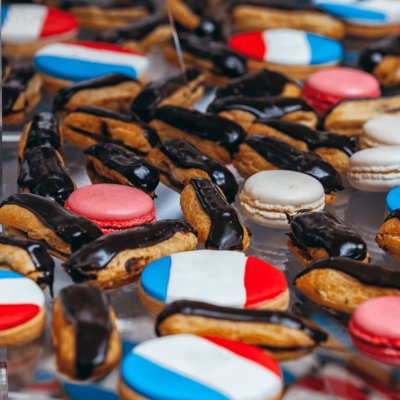